I have a seriously problem with Android Studio and the plugin of Pepper, especially with the emulator.

For few months I have the same problem: my android studio crash when I click on Emulator Icon (Orange icon on toolbar).

I tried everything : uninstall android studio, uninstall plugin of pepper but I have always the same problem.

When I run my android studio as administrator, sometimes it works...

I have the latest version of Android Studio (see PJ).

Thanks for your help

I have not found a fix for the problem with the emulator for myself but a workaround:

First, I uninstalled the Pepper SDK, so I deleted everything. In the AppData/Roaming folder there is the Softbank Robotics folder, which I deleted completely.

Then I reinstalled the entire SDK.

Then the tools and the emulator have to be downloaded again via the SDK Management Tool from Softbank. All the stuff then ends up in the AppData/Roaming/Softbank Robotuics folder. I then made a copy of the Softbank Robotics folder and simply wrote clean behind it (Softbank Robotics - Clean). This gives me a clean and unused version as a backup.

Now comes the catch and the reason why we make a backup of the Softbank folder. The next time you try to start the emulator you will have the old version again, so Android Studio crashes and nothing happens. Apparently you can only get an emulator to run that has never been started.

So I wrote a small script (.bat) which first kills all Qi processes and then deletes the Softbank folder in AppData and copies the clean version over it again. Then you have an untouched emulator again.

I have attached the script here, the following line must be adapted with the folder name:

Here I use the folder "Softbank Robotics - Clean" where I saved my clean version. 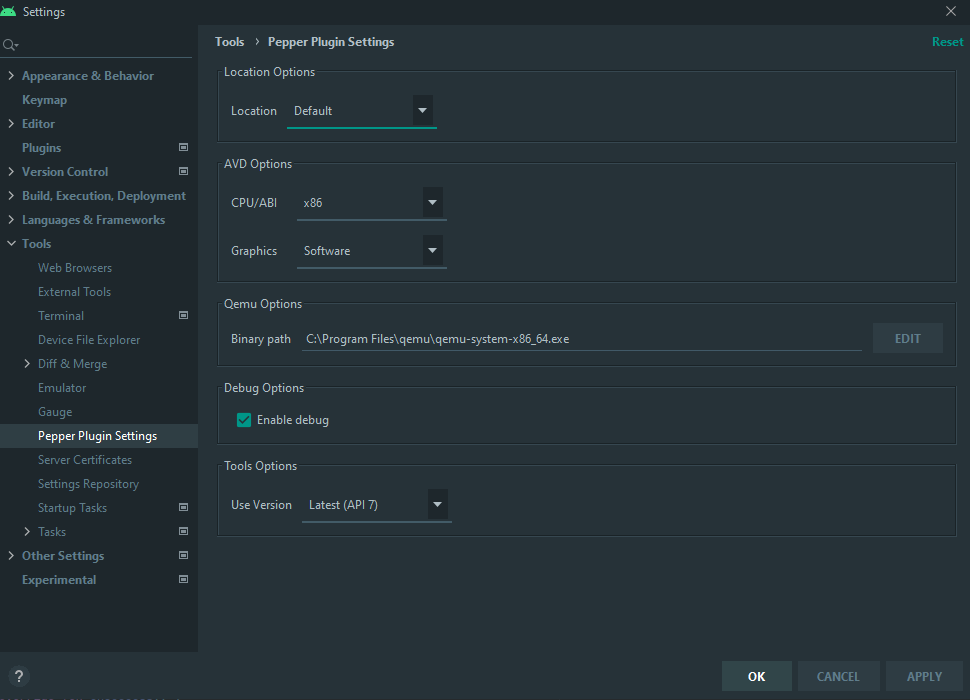 And for About version :

Thanks to you for your help

I was discussing this issue with the investigation team from Softbank, could you actually send me again the Pepper plugin settings, it should look like the attached image. 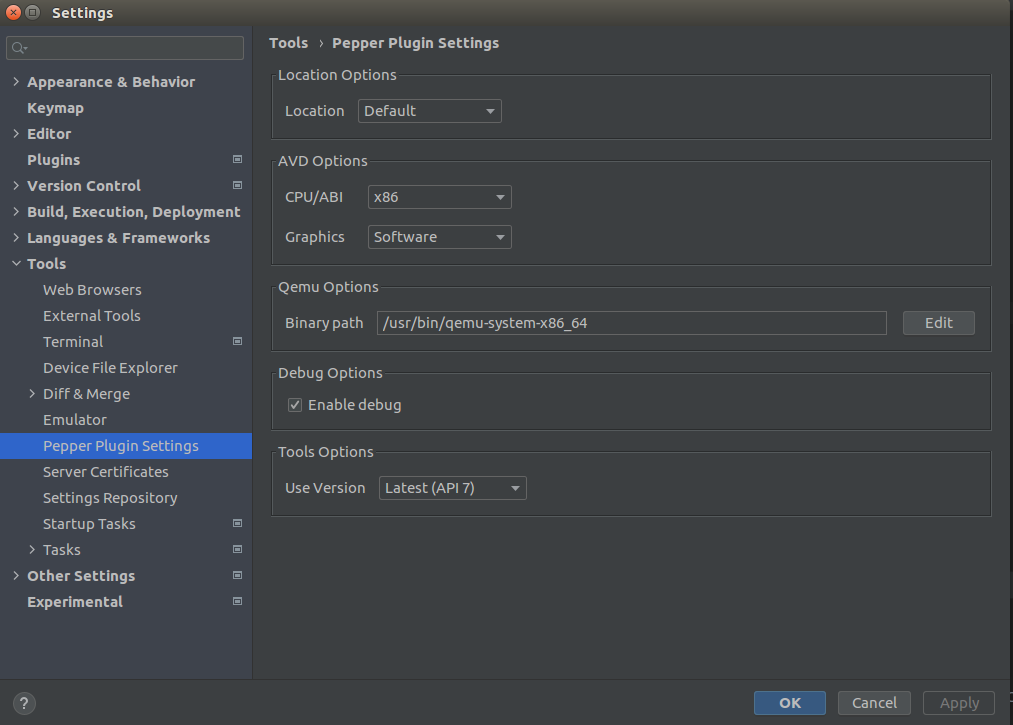 You can find it in File => Settings => Pepper plugin settings
If you change the AVD option you can sometimes make it work with less issues (by selecting Software for Graphics for example).

Can you also go in About and then copy paste the info (Android version, OS, etc ...) you have the option to do so when hovering with your mouse over the frame that appears.

thank you for your answer.

In PJ the files you asked me.

I hope it will help you.

And yes I have checked all troubleshooting but it seems to be ok.

To help investigate, could you :

Thank you in advance !

Yes I have found this command line and I tried with Pepper name but it's not recognized indeed :

HOME is defined but there is no file Pepper.ini in $HOME\.android\avd

Thank you very much for your help.

I have found the following command line here : (https://developer.android.com/studio/run/emulator-commandline)

Which could potentially worked, name of the AVD is "Pepper" but emulator.exe wouldn't recognize it by default I think.

In parallel, Softbank is currently working on a workaroundfor this issue as several customers are experiencing it.

I have tested on Arctic fox I have the same problem.

It seems that the problem is on naoqi_bin , qilaunch and publicsd instance (when I have investigate process).

My goal is to reproduce the action when I clicked on the robot emulator tool in Android Studio but in my powershell to avoid the software to crash !

Ok I see, indeed it should work...

Have you had the chance to try it out with an older version of Android Studio, does the same issue occur ?

Thanks for your answer, it's windows 10.

And I checked everything on this documentation : https://qisdk.softbankrobotics.com/sdk/doc/pepper-sdk/ch1_gettingstarted/installation.html

Which OS are you using when working with Android Studio  ?

This post will be deleted permanently. Are you sure?